IN SCANDAL THEY WED by Sophie Jordan

Excerpt for IN SCANDAL THEY WED by Sophie Jordan 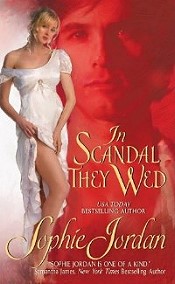 What kind of woman would marry a man she only just met?
The kind with nothing to lose.

Long ago, Evelyn Cross sacrificed her good name, her freedom, and any hope for love. Now, in the remote English countryside, she struggles to survive and avoid the scandal threatening to destroy all she holds dear . . . until a sinfully handsome viscount arrives on her doorstep, offering marriage, salvation, and tempting her with so much more . . .

What kind of man would marry a woman he only just met?
The kind bound by duty.

Fresh from war, Spencer Lockhart returns home to claim his title and right the wrong his cousin perpetrated upon Evelyn Cross. In need of a wife, his marrying her is a small price to pay for duty. But when he meets her, the fiery chit is not what he expects to find in a ruined lady. As desire flares hotly between them, honor is the last thing on his mind . . .

What kind of man and woman would marry when they've only just met?
The kind who could ignite a scandal with just one touch.