ONE NIGHT WITH YOU by Sophie Jordan

Excerpt for ONE NIGHT WITH YOU by Sophie Jordan! 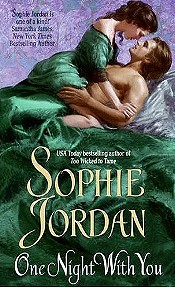 Anything can happen after dark . . .

Tired of being treated like a servant by her own family, Lady Jane Guthrie finally has a chance to escape . . . at least for one night. Attired in a daring gown, she arrives at a scandalous courtesans' masquerade ball looking forward to her few hours of freedom. But when she sees Seth Rutledge, her skin begins to tingle with anticipation. Many years ago, Seth broke her heart by falling for her beautiful, title-hungry sister. But now here he is, right in front of her, offering her his lips . . .

Embittered by war, Seth returns home to inherit the title that would have once won him the woman of his dreams. Though duty demands he wed, he's convinced passion no longer has a place in his life . . . until a masked siren sets his heart aflame. Desperate to find her again, he has no idea it's his childhood friend Jane—and that after one night together their lives will never be the same.

Desperate to escape his nearness, his touch, Jane stepped back until she felt the cold glass penetrating the fabric of her gown. But Seth followed, caging her in.

He lifted his hand and slid long fingers over her cheek, sparking a fire in her blood that forced the air from her mouth in a hiss.

The calluses of his palm rasped her skin as he gazed down at her, the dark centers of his eyes glowing. "Are you real? Or some enchantress?" His hot look robbed her of breath. "Why do you look at me so?" His hoarse voice scraped over her nerves.

Hysteria bubbled up inside her. Because I loved you. Once. When I knew you. When you knew me.

She didn't know what undid her more, the heat of his gaze or the way his touch made her come alive after years of living numb.

A featured alternate in Rhapsody and Doubleday Bookclubs