how the dukes stole christmas 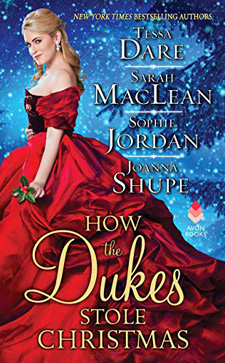 From the ballrooms of London, to abandoned Scottish castles, to the snowy streets of Gilded Age New York, four bestselling authors whip up unforgettable Christmas romance.

“Meet Me in Mayfair” by Tessa Dare
Louisa Ward needs a Christmas miracle. Unless she catches a wealthy husband at the ball, the Duke of Thorndale will evict her family from their home. When Louisa finds herself waltzing with the heartless Thorndale, she’s unnerved by his handsome looks—and surprising charm.

“The Duke of Christmas Present” by Sarah MacLean
Rich and ruthless, Eben, Duke of Allryd doesn’t care for the holidays. But when Lady Jacqueline Mosby returns to town after a long absence, Eben falls under the spell of Christmas—and the woman he never stopped loving.

“Heiress Alone” by Sophie Jordan
When Annis Bannister finds herself stranded in the Highlands during a Christmas snowstorm, she must fend off brigands terrorizing the countryside. Her only hope falls on her neighbor, a surly hermit duke who unravels her with a kiss.

“Christmas in Central Park” by Joanna Shupe
Mrs. Rose Walker pens a popular advice/recipe column. No one knows Rose can’t even boil water. When her boss, Duke Havemeyer, insists she host a Christmas party, Rose must find a husband, an empty mansion, and a cook. But Rose fears her plan is failing—especially when Duke’s attentions make her want to step under the mistletoe with him.

For your reading pleasure: an excerpt from Heiress Alone.

Annis Ballister took another turn about the house to be certain, her steps echoing in the silence. The drawing room, the parlor, every chamber – all empty. Even the ghostly ballroom that hadn’t seen use in decades and was in dire need of a good cleaning loomed vacant. Her younger sisters had liked to frolic over its stone floors, imagining they were debutantes at a grand ball in London. Anywhere other than here.

However they weren’t here now. The place was empty.

“Hello?” Her voice rang off the rafters of the drafty old Scottish castle Papa had won in a game of whist.

Her father had thought a holiday in Scotland’s Highlands the perfect lark. An escape from Town. He’d hunted stag to his heart’s content whilst Mama languished indoors, sipping her sherry, despairing of their exile to such a primitive location and rereading old scandal sheets.

Annis did not mind the respite from Town. Hardly anyone was about in the winter months anyway. Although truth be told, even in the height of the season, she would have rather been in the country. Not that she ever got her wish on that matter.

She always felt judged and scrutinized and deemed lacking by good ton … and considering those were the only people Mama ever wanted to mingle with, life could be tedious.

Truthfully, Annis found the stark beauty of the Highlands, even if snow-shrouded and bitterly cold this time of year, soul-stirring. A fortuitous circumstance since, apparently, her family had forgotten her. They had left her and returned to that gilded cage for which Mama mourned.

She was well and truly alone. Abandoned.

“Unbelievable,” she muttered as she lifted her skirts and made her way down to the kitchens. Yet she could not summon forth too much annoyance. As one of seven children, she was rarely afforded solitude. A part of her relished the echoing silence. For however long it lasted. And it couldn’t last long. They would return once they realized they had left her.

Annis took the winding stone steps carefully, minding her steps and shivering as the cold intensified. She pulled her shawl tighter about her shoulders and stepped down onto the damp stone floor of the kitchen to the tune of Fenella humming. A sound she knew well as she had spent a good amount of time in the kitchens, enjoying the housekeeper’s company. Fenella was an interesting person, full of colorful stories almost too farfetched to be believed.

So … not totally alone then. Thankfully. Fenella stood with her back to Annis, working at something on the table before her.

“Hello,” Annis greeted, her voice echoing off the walls of the cavernous kitchen.

Fenella screeched, flinging a mound of dough in the air. She spun to face Annis, one bone-gnarled hand pressing against her thin chest. “Lass! Ye gave me a fright!”

The housekeeper shook her head. “Wot are ye doing here? Ye should have left this morning with the rest of ‘em.”

Confirmation then. They had in fact departed whilst she slept. Improbable as it seemed, her family had forgotten her. She supposed it could be understood. They were a large family with numerous staff, and they had apparently left in some haste. It was not even noon yet. Her sisters were notoriously late risers. The hand of God Himself would have had to drag them from bed. If she had not stayed awake so late reading by candlelight, she would have risen at her usual early hour.

“I did not realize we were departing today.” They had planned to stay until tomorrow. Much to Mama’s displeasure, Papa had secured her promise to stay here a fortnight and he would not be swayed to leave sooner. He’d wanted ample opportunity to hunt and he claimed they would have time aplenty to reach London by Christmas. He’d been resolute on the matter. Annis could not imagine what changed his mind and precipitated such an early departure.

Fenella waved an arm. “Did ye no hear the commotion?”

Annis resisted pointing out that she occupied the farthest removed chamber on the third floor. That had been no random occurrence either. She had selected the room for its very remoteness from everyone else, craving the rare privacy for herself.

Fenella continued, “Angus woke the house early this morn. Snow was rising high in the pass, and the rate it be falling, ye all risked being trapped here.”

Ah. Annis nodded. Mama could not have borne being trapped here one day longer than necessary. She could well imagine the frenzied exodus of her family and their staff.

“Well, then. I imagine Papa will send one of the coaches back to fetch me once they realize I’ve been left behind.” She smiled. She would have something to hold over her parents. Perhaps she could use it as leverage to bow out of the next ball or fete Mama attempted to force on her.

Just then the door leading outside from the kitchen opened, sending a gale of cold wind gusting into the room. Angus, the groundskeeper and Fenella’s brother, shook the snow off from his bent shoulders and removed his cap, slapping it on his trousers … pausing mid-motion when his gaze landed on Annis. He straightened his wiry frame. “Och! What ye be doing here, lass?”

“They forgot ‘er!” Fenella exclaimed, outrage high in her voice as she pointed a damning finger at Annis.

His wide eyes passed back and forth between Annis and Fenella before resting on his sister. “Well, what now? What we tae dae with ‘er?” This he directed at Fenella.

“I am sure Papa will send a carriage to fetch me,” Annis repeated for the benefit of Angus.

They stared at her.

She angled her head expectantly, awaiting their relief. Really, she saw no reason for such excitement.

“Nae,” Angus returned, shaking his head slowly, his tone solemn. “There be nae getting through the pass. Yer stuck here until the snow melts.”

“Melts?” she echoed, her stomach knotting. It couldn’t be as bad as it sounded. “And when will that be?”

He shrugged and exchanged a dark look with the housekeeper. “Mayhap… March.”

Read excerpts from Tessa Dare's Meet Me in Mayfair, Sara MacLean's The Duke of Christmas Present, and Joanna Shupe's Christmas in Central Park, at their websites!