how to lose a bride in one night by Sophie Jordan

"An emotionally touching story in which two damaged souls heal
and find their happy-ever-after in satisfying ways." --Kirkus 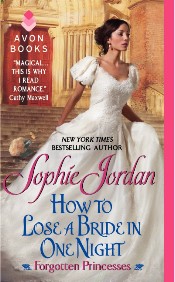 He saved her life...

When Annalise Hadley is tossed over the side of her honeymoon barge, the newly-minted duchess knows she's been left for dead -- for her husband's only interest is in her vast dowry, not her muddied lineage. However, she didn't count on a savior. Especially not an honorable, sinfully intriguing earl who will tempt her to risk everything—again.

Now he will seduce her heart and soul

A man with his own demons, Owen Crawford, the reclusive Earl of McDowell, is enchanted by the mysterious, courageous woman he rescued. He will help her heal, teach her to protect herself, and then send her away—so that she’ll never see he’s far from the hero she believes him to be.

But days and nights alone prove that some secrets are meant to be discovered...some desires are too powerful to resist…and some wounds can only be healed by love.

"What's next?" he demanded. "A marriage proposal?"

"Is that what you think? Marriage? To you?" She gulped a breath, stifling her laughter. "That would be akin to not being married at all. You're never around. You hardly speak. You certainly won't touch-"

The rest of her words were cut off by his mouth. She cried out, but the sound was lost, consumed in his ravaging lips.

It was nothing like the quick, chaste kiss Bloodsworth bestowed upon her to seal their wedding vows. He nibbled on her bottom lip sweetly. When he stroked the flesh with his tongue, everything inside her shook alert, awake and alive and hungry…